Baggage is one of the infrastructures of your airport, handled separately from passengers.

Note that belts on different levels will not intersect, requiring the use of conveyor-ups and conveyor-downs to switch levels. Also, conveyors switched to another level actually can interfere with construction on that level, requiring planning in order to avoid possible conflicts in construction.

Baggage can be introduced to the system by:

Baggage can exit the system by:

Baggage handling is a system that needs to be procured through the R&D Menu. Upon receipt, additional items unlock for procurement, these include tilt trays and scanners.

Do note that most baggage systems wont make a huge (if any) profit. Researching baggage is more for increasing airline happiness and realism.

For a baggage system to function properly, there are many elements to account for:

It is imperative while constructing a baggage system that arrows are observed as they will direct the flow of baggage. In addition to designing the physical infrastructure associated with a functional baggage system, it is necessary for the player to manually assign stands (and by extension, check-in desks) and baggage claims to the desired baggage bays. A baggage bay can be assigned to 12 "points" worth of stands, which is equivalent to a maximum of 12 Small stands, 10 Medium stands, 8 Large stands, or a combination of the three. 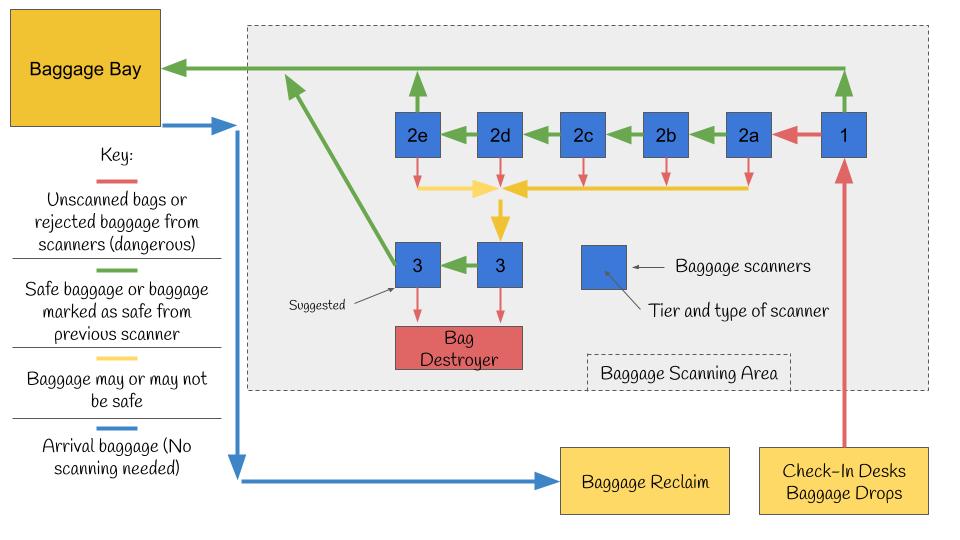 The baggage overlay lets you see which direction and where your baggage belts are going to. You can turn this on by clicking the baggage icon around the bottom center of your screen or pressing shortcut "B" (can be change in the control setting)

Screening of baggage is performed by passing through scanners. There are three stages of scanners, (I), (II), and (III).

Generic Baggage Scanner (I) is a basic scanner capable of automatic broad-range threat detection. Suspicious bags are redirected to the reject output. All passed bags may continue to baggage bay.

Specific Baggage Scanner (II) is specific to the type of threat being screened for (Drugs, Guns, Explosives, Organics, Money). Suspicious bags are automatically redirected to the reject output. All passed bags may continue to baggage bay.

Scanning Station (III) is a staffed position that allows a security staff member to make a decision as to clear or reject a bag. It is typical to find the Scanning Station as a final point of decision for suspicious bags coming from upstream automatic scanners. All passed bags may continue to baggage bay BUT routing baggage through another level lll baggage station is suggested, as there can be false negatives!

Reject outputs must eventually connect to a baggage destroyer that consolidates and removes rejected bags from the baggage system.

Baggage tags inform the player to the disposition of any bag. They will first show the flight number to which it is destined to, then whether or not a bag has been screened, and if screened, what its contents are.