The Flight Monitor allows you to view the progress of the turnaround process on active commercial flights. This come in handy for players who need to find the cause of a flight's delay. Delays can be caused by a variety of factors such as a shortage of checkin desks, ramp agents, service vehicles or even seatings. A player can have an efficient airport with just one weak link causing delays on it all, so a good understanding of the flight monitor is certainly more than a luxury.

This shows the company that operates the flight. There are currently 21 commercial airline companies in the vanilla game.

Here you see the name of the stand where the aircraft for this flight will be parked upon for the turnaround. These names can be changed on the stand's UI (User Interface or menu). Remote stands will be given a '(remote)' appendix to their name. 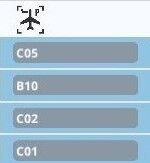 This column displays the operational status of the flight. These statuses are

Landed hh:mm; The flight has landed at the given time, and is taxiing towards the stand[]

This part shows how many passengers are planned to arrive to you airport when the flight arrives (deboarding) and the amount of people that are going to board the plane.

This section shows when the flight was scheduled to arrive, the amount of time it should stay on the stand, and the time it should leave the airport.

The next 11 columns are for monitoring how certain aspects of the turnaround process are going. Here you can see:

If there are any issues they will appear in the warnings section of the monitor, on the right. Hover over the 0 or 1 to see the issue.